The interesting thing about Kanaloa as a god is the fact that he also is a giant squid. And apparently his smell is also noteworthy, his long name meaning “Evil-Smelling Squid.” This makes an easy case for him to later be turned into the devil in opposition to Kane, sulfer and squid stink being of a comparable caliber.  This “fall” of Kanaloa makes him a good partner for the Slavic god Veles, who also became the devil, and in some portrayals was part-snake or all snake (depending on what 1,050 year old witness you consult with). Kanaloa was juxtaposed with Kane, like Veles to Perun (the Slavic god of lightning).

Here are two versions of Kanaloa I was toying with. 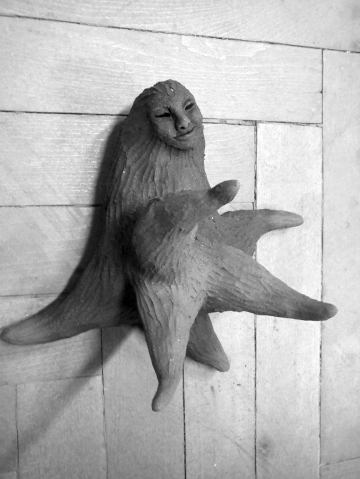 Kanaloa, like Veles, is a god of sorcery, a prayer to get him to heal someone would go like this: “Kanaloa, god of the squid, here is your sick man.” Pretty straight forward, no? Makes me think that he probably was a very easy-going fellow. He is the god of the south, was married to Kapo/Tapo (maybe two different women, I am not sure, but either way Pele’s sisters. Naturally!). He also provoked Kane to make a ton of freshwater springs appear all over the Hawaiian islands. Literally provoked, saying “Let’s see you do it!” and Kane was like “check this out!” then thrust his staff into the earth, and mighty streams rushed out…this was the naughty bit of the story.

One thought on “Kanaloa (the god who became the devil)”